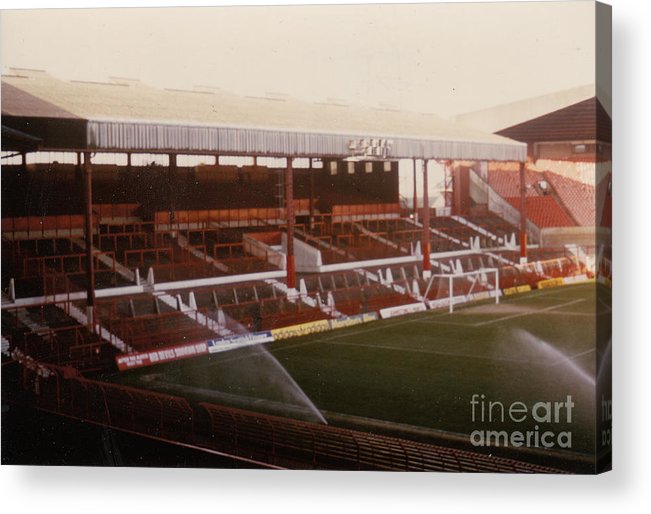 Manchester United - Old Trafford - Stretford End 1 - 1974 acrylic print by Legendary Football Grounds.   Bring your artwork to life with the stylish lines and added depth of an acrylic print. Your image gets printed directly onto the back of a 1/4" thick sheet of clear acrylic. The high gloss of the acrylic sheet complements the rich colors of any image to produce stunning results. Two different mounting options are available, see below.

Laid out between a railway line and a canal, two symbols of Manchester’s history as a hub of the industrial revolution, Old Trafford is the largest... more

Congratulations on your sale of this wonderful artwork! F/L

Laid out between a railway line and a canal, two symbols of Manchester’s history as a hub of the industrial revolution, Old Trafford is the largest stadium in the Premier League and second largest in English football. Manchester United moved to Old Trafford in 1910 after engaging Archibald Leitch to design the stands. The stadium was one of the finest in England and hosted the 1911 FA Cup Final Replay and the 1915 FA Cup Final. Old Trafford’s record attendance of 76,962 was set without the participation of Manchester United. The occasion was a 1939 FA Cup semi-final and Old Trafford was the “neutral ground” for the match between Wolverhampton Wanderers and Grimsby Town. Old Trafford was the first ground in England to feature perimeter fencing as an effort to combat hooliganism. The fences were removed following the recommendations of the Taylor Report and the ground capacity was reduced to 40,000 all-seated by the early 1990’s. The success of the club during the Premier League era ha...